‍VoiceVoice is a video conferencing platform that allows participants to share their voice, connect with like-minded people, and contribute to meaningful conversations about topics they deeply care about.
‍
Recently, they have been struggling with customer acquisition and asked my team to redesign their website to attract new users and potential customers. I worked with two other UX designers to audit the current website and recommend structural, content, and design changes to more effectively communicate VV's value propositions to prospects. 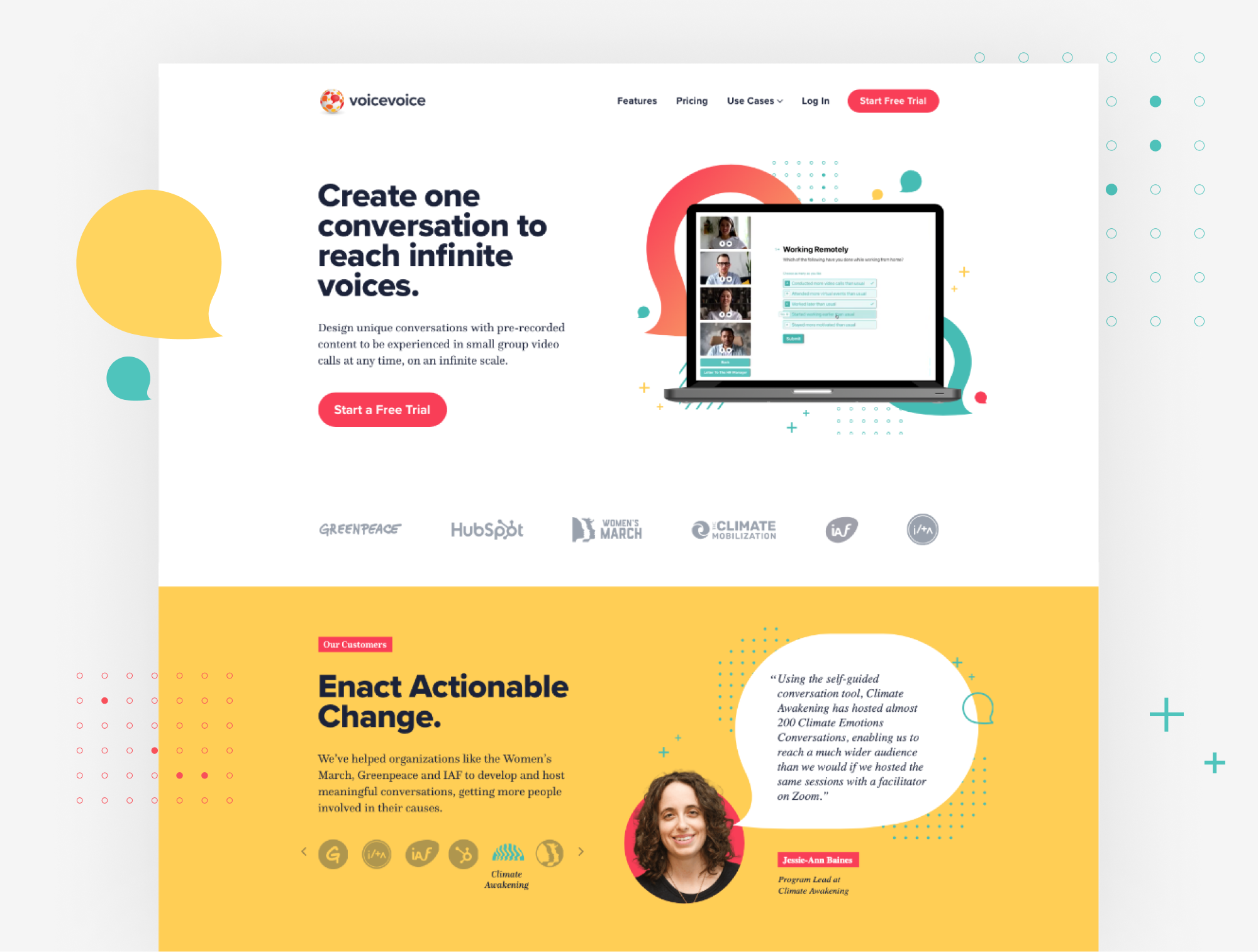 Impact: Exit rate overall decreased by 33%, and bounce rate by 36% after implementation

Narrowing the scope: From complete redesign to prioritizing the homepage

We were initially tasked to do a complete overhaul of the website, but preliminary research indicated that the biggest issues were on the high level pages of the sites structure.

With our 1 month timeline, we made it a priority to focus on the homepage and navigation bar.
‍

With major clients like The Movement for Black Lives, GreenPeace, and The Women’s March, VoiceVoice gives people who are passionate about a cause or political issue a voice in the conversation, inspiring them to take actionable steps to further elevate the organization's agenda.

The platforms unique presentation designer gives host organizations the ability to pre-record and create content ahead of time (from videos to discussion prompts) for hands-off breakout room facilitation that save them time and money.

For several years, VoiceVoice has been struggling to acquire new customers

The website is outdated and current digital marketing efforts lead users to landing pages deep within the website that aren't easily accessible to users unless they explore beyond the homepage.
‍
‍

VV's business goal is to attract users to sign up for free trials and eventually subscribe to their service. In the last 6 months, 62% of users dropped off immediately from the homepage.

Half of the items in the navigation are not utilized, and there are too many options to choose from that could potentially overwhelm the user.‍

2. The current layout flow doesn't consider the users mental model as they scroll down the page:

Assumption: Users are unclear of the value VV can bring to them

Validating this assumption through 5-second testing

First-time visitors don't even understand what VoiceVoice is

First impressions are crucial when it comes to product marketing, and websites typically only have a few seconds to grab a potential customers' interest.

I conducted a quick, unmoderated 5-second test with 10 users to evaluate their first impression of the landing page and find out whether or not current product messaging is effective.

1. What is this product?

2. What features does VoiceVoice offer?

As expected, users overall could not identify general characteristics about VV, and their responses varied between audio, chat, and video. In addition to quantitative results (free trial conversion), one of our goals is to find improvement in the 5-second test after the redesign.

Showing how, not just what

VoiceVoice's messaging currently focuses too much on what the platform's technology is instead of explaining how its service could be used to fulfill a customers needs through different use cases.

Similar competitor platforms like Toucan, Remo and Toasty use compelling headlines and copy to clearly communicate the experience a potential customer is going to buy just from the homepage.

Since only half of the current menu items are being used, the new navigation bar focuses on the most visited items based on analytic data and information the user would need in order to feel convinced to request a demo.

Testimonials are a great way to showcase immediate value and credibility, but we found out that a majority of clients listed on the current website come from their other product, MaestroConference. Instead, the homepage will highlight
‍

Choosing between "free trial" vs. "request a demo"

But people may not invest the time if they don't understand the platform first. We opted to focus the main call-to-action on free trials given the business goal, but kept the option to request a demo at the bottom of each page to still allow users the option.
‍

While not implemented in the end, the new "Possibilities" page

The new "Possibilities" page we implemented gives users detailed insight into the variety of solutions VoiceVoice can cater to based on use cases similar to the customer's needs.

With limited access to VV's target user base, we ran testing under the assumption that if we could successfully communicate the value propositions to non-target users, prospects within their target audience would be able to understand how VoiceVoice can further their goals.

‍We created the "Possibilities" menu item without considering how users would interpret the term. The test revealed that users couldn't differentiate between "Possibilities" and "Features", validating the client's assumption from earlier. We opted to go back to "Solutions" instead.

Words such as "host-less", "self-guided", and "intimate" were unfamiliar to users.

Users interpreted the product as a software for text conversations, a live streaming platform and breakout rooms for voice, all of which were incorrect. We took a step back to review and adjust copy we had rewritten with these considerations as we moved into high-fidelity.

‍"So do you have conversations with everyone? If there's no host, who leads the conversation? Am I going through it all by myself?"

Our final mockups had placeholder images for custom graphics later created by their designer. All other copy and structural changes based on our suggestions were implemented.

The new navigation bar (A) features menu items that are crucial to the customer journey and lead them to start a free trial. The new hero copy paired with an animated graphic gives the user an overview of VV's value propositions (B) along with impact statements from clients with varying use cases (C).

What was once a small, text-only section of the page, the new layout (D) breaks down each step with visuals to give the user a basic walkthrough of the presentation designer.

To leave a lasting impression on the user, a testimonial and mission statement summarizes why VoiceVoice is different than it's competitors like Zoom (E). Instead of a call to request more information, the new action-oriented CTA gives users the choice to request a demo or try out the platform on their own for free (F).

‍
5-second testing on the redesign

I conducted another 5-second test to assess whether or not the new design better communicates the gist of what VoiceVoice offers. We compared the responses before the redesign and with our high fidelity homepage and saw overall improvement.

1. What is this product?

2. What features does VoiceVoice offer?

Since the 5-second test is only a quick way to gain high-level insight into how well the product messaging is at first glance, we recommended an additional round of user testing to compare results from mid-fidelity screens.